Stewart Hargrave (aka McJones, McJonesRylie, or Professor McJones) is Austin's brother and was a regular member in the Hardcore series. While he has a YouTube channel, he does not upload any content to it.

Appearances outside of Hardcore Edit

Stewart first appeared in Adventure to MINECRAFT HELL! Together with PBG and Kyrak, the trio explore the Nether together on a quest for glowstone. They all die several times.

McJones helped PBG in The MySims Massacre, where he dug the hole to put in the My Sims game, as well as film parts of it too.

McJones played the role of Herobrine in the G-Files: Minecraft episode.

McJones was one of the members of jiffyjimbothe3 and ntn755am

McJones has been in every series of Hardcore to date. He holds several roles throughout the series, usually being the only person who knows what he is doing! He regularly lasts a long time in each series, being the first person to succeed in 2 series, but usually dies to freak accidents late in the series. He has been killed by both the Ender Dragon and the Wall of Flesh, however, he did defeat the Elder Guardians.

He is regularly called "Professor McJones". This is due to his vast knowledge and experience in the games they are playing. He often gives advice to other players and tells them detail on what they need to achieve to accomplish their goals.

He also plays a straight man role and foil to Dean, who is much less predictable. Dean regularly insists on traveling with McJones, much to McJones' disapproval.

On March 10th of 2018, McJones officially stated he was retiring from Hardcore.[1]

McJones has appeared in every season of Hardcore up until Starbound 1. Originally, McJones' theme song is the theme from Jeopardy. From Minecraft Season 5 onward, this is changed to the Professor Layton theme. 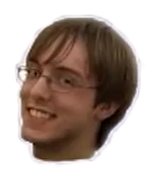 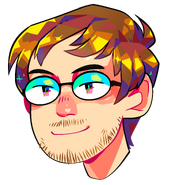 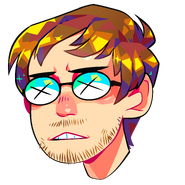 Retrieved from "https://peanut-butter-gamer.fandom.com/wiki/Stewart_Hargrave?oldid=12740"
Community content is available under CC-BY-SA unless otherwise noted.